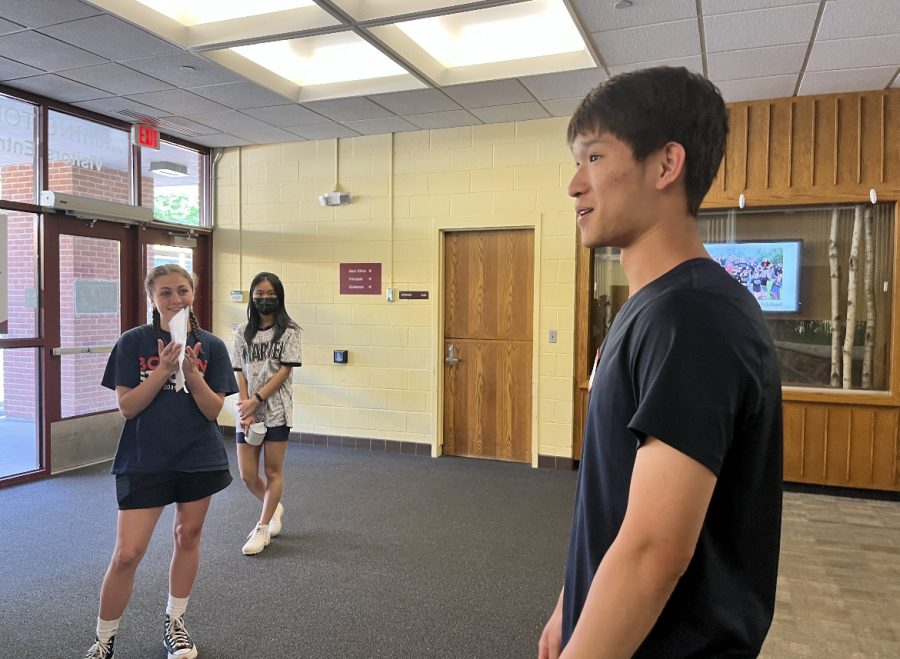 Speaking in front of you now -- Senior Andy Dong gives advice to middle school students as he guides them through the high school. Dong was named Valedictorian and will deliver a speech in front of his peers during graduation on June 14.

Ending his high school academic career, senior Andy Dong is graduating top in the Class of 2022 and has been named class Valedictorian. He is a dedicated student and is involved in many activities throughout the school and the community and will deliver a speech and he is recognized at graduation.

“It’s an honor, I am grateful to be here but the credit doesn’t all belong to me. I could not have done it without God and support from my parents, teachers, friends, and I am very grateful,” Dong said.

Dong also spends his time sharing his knowledge with his peers and with younger students. He is involved in the SPARK Tutoring program at the high school, working as a peer tutor in a variety of subjects to help his classmates and underclassmen. He also works at West Woods Upper Elementary Schools to help younger students, a rewarding position as he helps younger children reach their full opportunity.

Although he has had a good experience in many classes during his academic career, his favorite class was AP Biology. He took the class during his junior year, which was a hybrid model of learning, but still found it interesting and engaging. In fact, he was so fascinated by the subject that he will be studying it at the postsecondary level.

“I enjoyed AP Biology so much that I decided to pursue a major in Biology. To be honest I’m still trying to figure out what path I want to explore because I like so many classes and I’m interested in so many things that it is hard to narrow it down,” Dong said.

As the valedictorian, he will speak in front of his peers and their families during graduation on June 14. He is currently working on writing a meaningful speech, trying to be as thoughtful as possible with the limited time he has to deliver his message. He aspires to write a speech that will be something worth listening to in the less than five minutes he has with his words.

Dong will be attending the University of Connecticut (UConn) in the fall. His older sister graduated in May as a UConn graduate so he is familiar with the school and the opportunity it provides. He is also looking forward to joining different student organizations, such as Cru, a Christian fellowship program for students. Of course, he will be making many trips to the UConn Dairy Barn for ice cream.