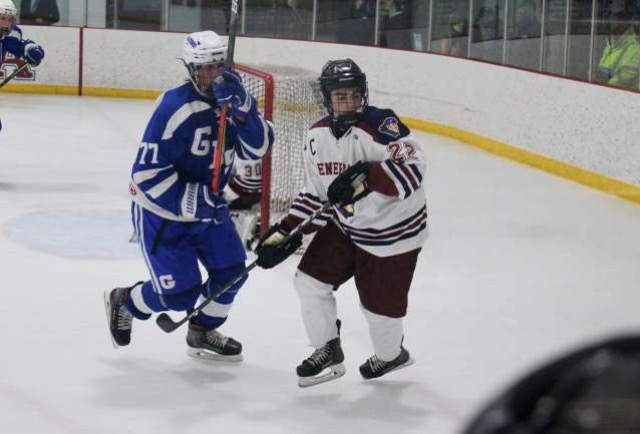 At the drop of a puck-- Senior captain Brendan Occhino races against his defender for a loose puck in the General’s most recent bout. Occhino is a tri-sport athlete who is a star on the court and off of it.

Senior Brendan Occhino is no stranger to a team environment. For four years, Brendan, or commonly known by his peers and teammates as “Keno”, has been an invested member of three different teams. In the fall, Keno focused his efforts on soccer, playing a big role in the team’s playoff run that resulted in the 2021 Class L State Champion. His high level of play as a defenseman was paired with his ability to lead his team.

“Keno was a key figure in the team’s championship run. He brought a high level of knowledge that can only be found in more experienced players. He grounded the team with his level-headedness and when we needed a big play, he made it”, senior manager EJ Sanchez said.

Just weeks after winning a state title, Brendan made an official commitment to Ithaca College to continue his lacrosse career. This coming after an extremely strong offensive year as an attackman his prior season as a junior. Looking towards the spring, Keno will hold the role of senior captain as the team looks to make a deep run into the playoffs.

In the current winter season, Brendan was named a senior captain in his fourth year on the Farmington Valley Generals (FVG). In the first few weeks, Keno settled into his role as a leader for teammates of not just Farmington, but from other towns the team is comprised of like Avon, Lewis Mills, and Windsor High Schools

Being one of twenty-six players on the team, Keno certainly stands out as a Center/Right Wing and as a figurehead of the team. He takes pride in his role as a captain, earning the respect of his teammates through his commitment to the team.

“My greatest takeaway from being a member of this program is when someone puts their trust in you, it is your responsibility to give maximum effort for them. Since my first hockey practice as a freshman, my coaches and teammates have trusted me to perform at the highest level and that is what I strive to achieve every time I touch the ice. Above all, I have learned to be responsible for being a positive leader which includes motivating and communicating with my teammates”, Keno said.

Despite some mid-season turbulence, the FVG have bounced back with a 2-game winning streak. In addition to Brendan’s on-ice leadership, some teammates look to his success as a student athlete for motivation.

“The kid is a perfect model of how to balance life. He’s a 3 sport varsity athlete, 2 sport varsity captain, and achieves in the  top of his class academically . He’s a great kid and an even better athlete to have on a team. He can calm down a team and get them focused to perform on the ice. I don’t only see him as a teammate, but as a classmate, colleague, and best friend”, junior FVG teammate Luke Watson said.

Keno’s responsibilities go above just performance, but as a mentor and representative for his peers. Brendan serves as an active member in Student Council, Peer Leaders, and the newly formed Student Athlete Council. In one of the Council’s first meetings, Keno shared a presentation to fellow nominated peers on athlete mental health.

“Brendan Occhino is a leader within the Farmington Community and also through Farmington Athletics as he demonstrates the motto that the Boys’ Soccer team frequently says, “we before me”.  He is a great teammate and leader in all aspects and will be sorely missed when he graduates from Farmington High School”, Athletic Director and leader of the Student Athlete Council Mr. Martorelli said.

Keno has and will continue to represent Farmington as a peer, trisport athlete, student, and a captain. Now, he looks to finish out his high school career with a competitive lacrosse season before moving on as a student athlete at the college level.