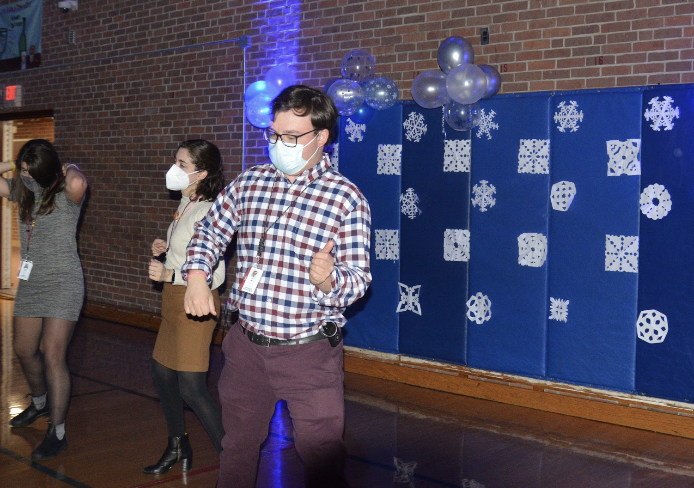 Daigle dancing-- Guidance counselor Kurt Daigle dances at the Winter Formal. Daigle and other teachers stepped up to chaperone the dance

Throughout meetings in November, student council subcommittees planned a winter dance for the student body. After the homecoming dance was cancelled this year, students felt they missed out and worked with the local health department to have an event in December. In mid-November, the student council and Principal’s Advisory Council made the decision to hold a dance, giving them just under a month to plan and execute it.

The first thing everyone agreed upon was the theme, “Winter,” the season during which the event will occur. Next was the date, a subject that required more consideration. The student council discussed two possible dates: one in December before holiday break, and one in January before possible midterms.

Eventually, they decided on Saturday, December 18 and began advertising around the school. The dance will be in waves, with the freshman and sophomore classes attending from 5:30-7:00 P.M. and the junior and senior classes entering an hour later from 8:00-9:30 P.M. This will give the council time to clean up for the next batch of students and keep everyone safe during the pandemic. With fewer people attending each wave, they’ll be able to socially distance more easily.

“The last dance we had in 2019 was the biggest one we had so we’re anticipating that this one will rival that. We had 500 students and we couldn’t fit all of them in the gym […]. If there’s low sign-up numbers, we will combine [grades] 9-12. We’re not opposed to that. We’re doing it this way first, to make sure every student has a chance to go to the dance,” Student Activities Director Chris Loomis said.

The council took into consideration other safety precautions as they planned, including serving pre-packaged refreshments to avoid excessive sharing of utensils, foods, and drinks. Advisors would like to limit the number of refreshments served to students in general, sticking with basics like bottled water and small snacks. Loomis also noted that due to the amount of students currently vaccinated in the community, the Farmington Valley Health Department ultimately decided that it was safe to have the dance; although influence from the students is what originally inspired the idea. Students have been hoping for another dance since the annual homecoming dance was canceled earlier this year.

“As soon as homecoming was cancelled; I will give our student council a lot of credit, they were persistent about having a dance so we stayed on it. I think as soon as that wasn’t happening we were always working behind the scenes to have one in the future,” Loomis said.

Students believe that they have missed out on key high school experiences, like dances, due to the many cancellations and mandates that COVID-19 has enforced in the past year and a half. The overall consensus is that people are excited to take part in such a large event with their peers, even if the grades will be separated for safety reasons.

“Although I am disappointed that I won’t get to be with some of my underclassmen friends, I think that if implementing waves is necessary for us to host the winter dance, then it is a sacrifice worth taking,” executive council External Vice President Tyler Grubelich said.

Underclassmen students outside of the council are also feeling excited about the dance, and many plan to attend with their friends.

“I think the dance is a good way to get us out of the slump of the pandemic, and we haven’t been able to do normal things so this will be a good opportunity to experience what we couldn’t before,” sophomore Rowan To said.

Overall, members of the student council and other students in the school community believe that this dance is going to be a great opportunity to spend time with their friends and that it will be a rewarding experience when executed in December.