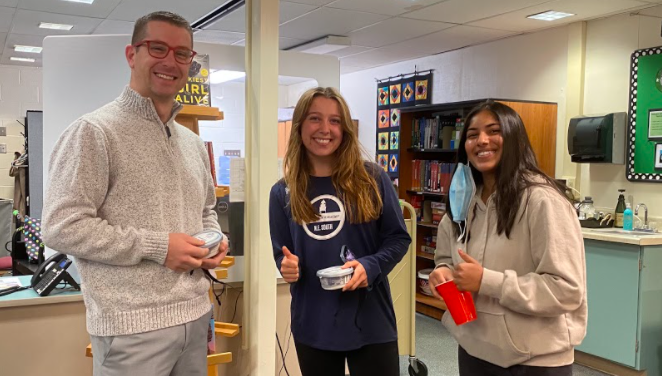 Ambassadors coming together - Club advisor Jeffrey Bonneau (left) and Co-Presidents Mary Gombos (middle) and Anita George (right) lead the club’s first in-person meeting of the year, a club breakfast. The club was inspired by a club that existed years ago.

Adapting the idea from the formerly run Student Ambassador club, juniors Anita George and Mary Gombos have brought the club’s unique ambassador program back as an opportunity for sophomores, juniors and seniors interested in joining.

Farmington High School (FHS) Ambassadors is a club in which students exhibit leadership in the school’s community and works to make sure that new students have a good experience and have ways to connect and communicate with their classmates. George and Gombos are running FHS Ambassadors very similarly to how the original club was run a few years ago. This year specifically, the club’s main focus is working with students who are new to FHS this year, as well as any that were new to FHS last school year but partook in virtual learning for the whole year and did not attend school in the building, as a virtual learning option was offered to students last year as a part of the hybrid learning system that was in place due to the pandemic.

“Last year during the activities fair I noticed there was a club called FHS Ambassadors so I reached out to the advisor asking him how to join the club. He told me that this club no longer existed because there was no one to run it at the time. From there, I reached out to my friend Mary, who is now my co-president, and we were both really excited to step up and take leadership in this club in starting it up again because we were really interested in the idea,” George said.

FHS Ambassadors’ first club event took place during orientation at the end of the summer leading up to the 2021-2022 school year. Students accepted into the club at the end of last school year were invited to attend orientation as a tour guide for new students. At the orientation, every ambassador was placed with a student pair who they toured around the building and gave advice to regarding the upcoming school year. After orientation, ambassadors were encouraged to remain friendly and close with their student pairs. Many ambassadors, including junior Alexa Xhindole, even formed good friendships with their student pairs and are a frequent outlet for questions and conversations.

“The tour and just the whole orientation experience went very well, not just for me but for my student pair as well. The whole time we were talking about what we had in common and I was giving her little tips and tricks about the school, such as when the intersections get super packed and crazy. I felt like the tour wasn’t super formal and I felt like my student pair and I could have good and casual conversations. This club is perfect for forming strong bonds with new people and you are able to expand your horizons and explore what’s beyond your personal bubble. You never know who you will meet in this club, maybe it will be someone who you will stay friends with forever,” Xhindole said.

Following the orientation, FHS Ambassadors have a few more events in the works for a successful first year since re-launching the club. On Monday, November 22 the club will have its first in-person meeting of the year, a club breakfast. The club also has plans to partner up with Irving A. Robbins Middle School’s new and in the works ambassador club and host a few social events this year, with the goal of promoting a sense of community and belonging for all.

“[The club]  really isn’t a whole lot different from the previous FHS Ambassadors Club of years prior. However, Anita and Mary reached out last year in hopes to revitalize this club with the specific mindset of wanting to create a welcoming environment for all at FHS, especially given the difficult times due to the pandemic. while FHS Ambassadors has traditionally been about connecting new students to the Farmington community, our focus has broadened and we’ve tried to put our arms around each student new to FHS, whether that be due to a move to Farmington recently, or due to social distancing impacting their ability to physically connect to their community,” club advisor Jeffrey Bonneau said.

Students interested in joining FHS Ambassadors will have to go through an application process. FHS Ambassadors is looking for individuals who truly have a drive to be part of creating an inclusive welcoming environment. Students who are interested in applying or have any questions can reach out to George or Gombos.