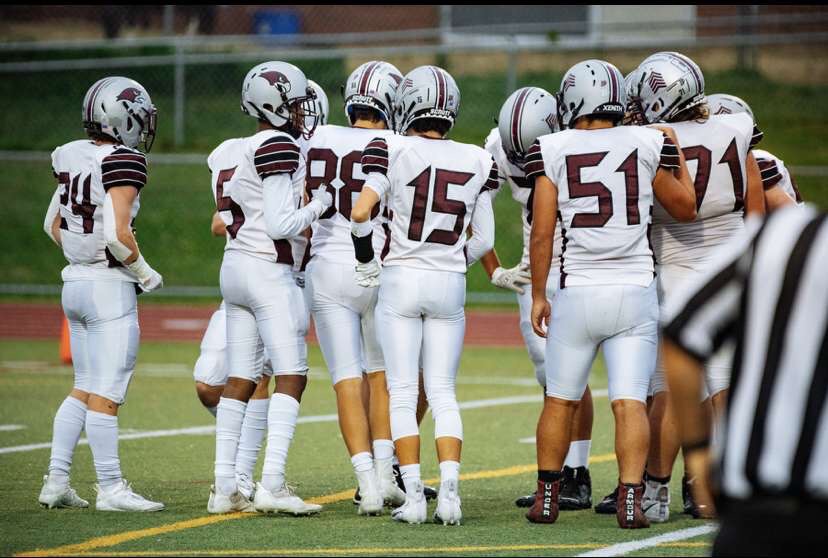 Back to business — The River Hawks offense prepares for a play against E.O. Smith. The team traveled to E.O. Smith on Friday September 17 for their second game of the season after missing last season because of the pandemic.

Even with the rising popularity of a variety of sports such as soccer, cross country, and rowing, the sport of traditional American football continues to attract players and spectators throughout Connecticut (CT). Making up for a missed season due to the pandemic, high school programs throughout the state return for a full season of football.

During the height of the pandemic last fall, teams were not permitted to play other towns in full field contact football because there was concern about the spread of the COVID-19 virus between opposing teams lining up on the field. However, for the 2021 season, the Connecticut Interscholastic Athletic Conference (CIAC) approved the return of full contact football between schools.

For the first time in 16 years, Farmington faced town rival Avon Falcons on the football field on October 22. The final score was a 40 – 20 win for the Falcons despite both offensive and defensive efforts from the River Hawks.

Another important game that the team looks forward to is the annual rivalry game against Plainville on Thanksgiving Day for the “Olde Canal Cup”. The River Hawks have won seven out of the eight games played in the series over the past eight years.

“Rivalries are a central part of what makes high school, collegiate, and professional sports unique. Players and fans on both sides bring an extra amount of energy and enthusiasm to rivalry games, especially when the other team is from the next town over! Often, these rivalry games carry with them a year of bragging rights and add to a history of competition…I can only hope that we are able to have enough control over our schedule to keep games like the ones against our neighboring towns a possibility,” Farmington head coach Chris Machol said.

“Mindset is everything when it comes to performance on and off the field. It’s what separates average high school athletes from those that continue to compete at the collegiate level. It is all your choice to succeed. Choosing to eat right, choosing to sleep right, choosing to take care of your body are all things I work to do daily,” Watson said.

Local school Hall High School in West Hartford is one of the CT schools that has caught attention throughout the state. The Warriors stand at 7 wins and 1 loss and are the only team to beat the historically successful Southington program this season. Other local schools with notable performances are preparatory schools Loomis Chaffee and Avon Old Farms, both being ranked nationally.

“I believe that our players have been extremely resilient in difficult situations. We have persevered through each game, regardless of the adversity, by continually working hard for the entirety of the contest,” Hall head coach Frank Robinson said.

Looking ahead to the postseason, brackets for the four classes, Class S, Class M, Class L, and Class LL, will be posted by the CIAC announcing further information about seeding and game location. The quarterfinal games are scheduled for Thursday, November 30 and the semifinal games are scheduled for Sunday, December 5, both played at the team with the higher seed. The final games will be played on Saturday, December 11 at Veterans’ Stadium in New Britain.