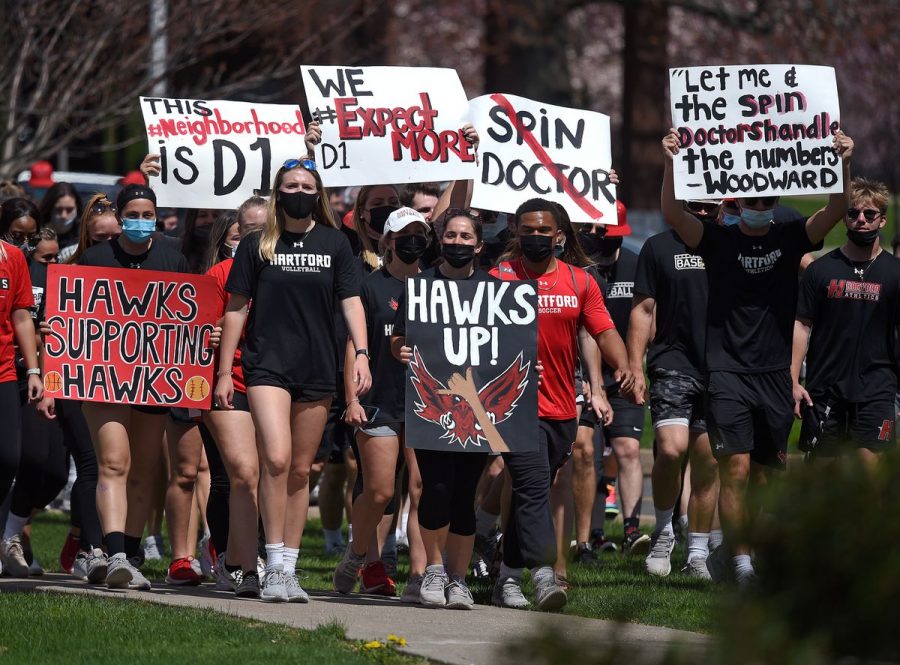 Brad Horrigan for The Hartford Courant

A disappointing Division decision -- University of Hartford students and athletes march with signs expressing their disapproval of the schools decision to move to the NCAA Division III. The school announced their decision in May 2021 but will not file their intent until January of 2022.

In early May, University of Hartford (UHart) board officials announced that their National Collegiate Athletic Association (NCAA) athletics would be moving from the Division I to the Division III. The decision shocked the student athletes of the school, causing them to speak out.

Despite an appearance in the NCAA Men’s Basketball March Madness tournament, the school believes that they simply do not have a large enough presence against higher ranked Division I teams. A study from the institution claims that the school was losing $13 million each year from athletics due to the exceptionally high costs of recruitment, travel, equipment, and additional fees associated with being in the Division I.

“A move to Division III will allow the University to further strengthen the academic, co-curricular, and wellness experience for all students. While we know this decision will disappoint some members of our community, we remain confident that this shift is in the best long-term interests of the institution and all its students,” Board Chair David Gordon said.

UHart records against other teams in Division I reflect strong effort, yet their status as a Division I team is being questioned due to financial concerns. The teams are often in various championships and tournaments, especially Women’s volleyball, Men’s basketball, and Men’s and Women’s soccer. There have also been notable individual achievements reflecting on the program, such as UHart women’s golfer Maria Loza earning the title of 2021 Individual Champion.

Although the NCAA Division III is also a respected division with athletes demonstrating high levels of skill and dedication, UHart athletes see the announcement to move down divisions as a demotion. Many athletes chose to attend the university simply because of their Division I status.

The campus is located in West Hartford but represents the city of Hartford as well. The athletics hold a strong presence in the community that is connected between the university and the city. National appearances in Division I tournaments, such as March Madness, puts the city of Hartford in the national spotlight, something that can not be gained from Division III events.

Hoping to emphasize their resistance to the transition, students marched the UHart campus in protest. Student associations and different athletic teams have also published multiple videos highlighting the case to stay in the Division I. In solidarity with the student athletes, students attending the Class of 2021 Commencement ceremonies booed President Gregory Woodward, stopping him from delivering a speech to the graduates.

The official decision to transfer to Division III is expected to be finalized in January of 2022 but will not take place until September of 2025 in order to commit to the scholarships already handed out to current students.