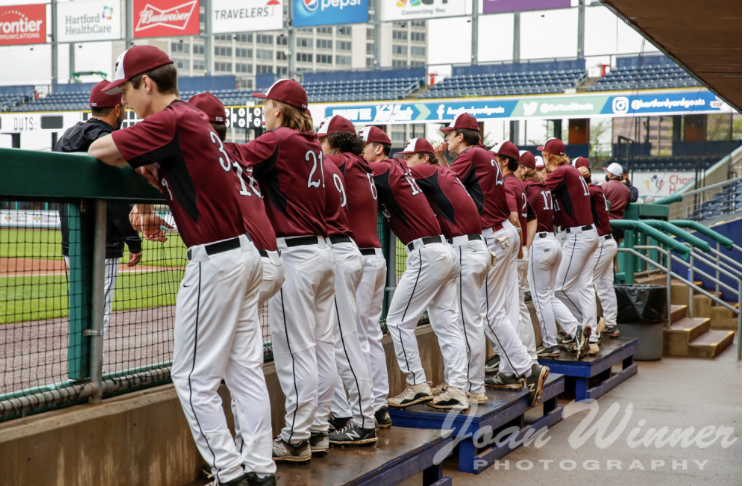 In the big leagues — The Farmington baseball team lines up in the dug out of Dunkin Donuts Park in Hartford. Farmington beat Avon 9-2 with the support of a student section.

For the entirety of the fall and winter sports seasons, Farmington athletic events were not open to the public, including high school students. Farmington High School (FHS) is known for its large student section supporting various sports, but COVID-19 restrictions prevented fans from attending games.

On May 5 the team faced town rival Avon High School at a neutral site of Dunkin Donuts Park, home of the Minor League Baseball team the Hartford Yard Goats. The park has a capacity of over 6,000 people, so the Farmington and Avon athletic departments decided that the size of the park would be big enough to maintain social distancing amongst high school students.

The team is led by senior captain Jackson Ferrigno who is committed to the University of Connecticut to play baseball. Ferrigno hit a home run out of the Dunkin Donuts Park, the only home run from both teams and one of Farmington’s 11 hits of the game. Other key hits came from a strong single hit by junior Brendan Kelly and Runs Batted In (RBI) by senior Nathaniel Watson and junior Cole Caccamo. Kelly also stood on the pitching mound for five innings, pitching two strikeouts and only letting up seven hits.

Wanting to make up for months of missed games, FHS students showed up to cheer on the River Hawks as they met the Falcons on the mound. The FHS Superfans, a group of seniors who are unaffiliated to the school, used their Instagram platform to communicate with their peers in order to spread the word about the game and give details about the student section for the night.

“I thought the atmosphere was great. It was great to be in front of that many fans again, the [student section] really brought our motivation up in some really key moments,” Ferrigno said.

The game ended with a 9 to 2 win for the Farmington River Hawks, the fourth straight win against the Avon Falcons in the past few years of the town rivalry. The win at Dunkin Donuts Park brought the team to 8 wins and 3 losses, a record that is consistently improving as the River Hawks continue to compete in the Central Connecticut Conference (CCC).