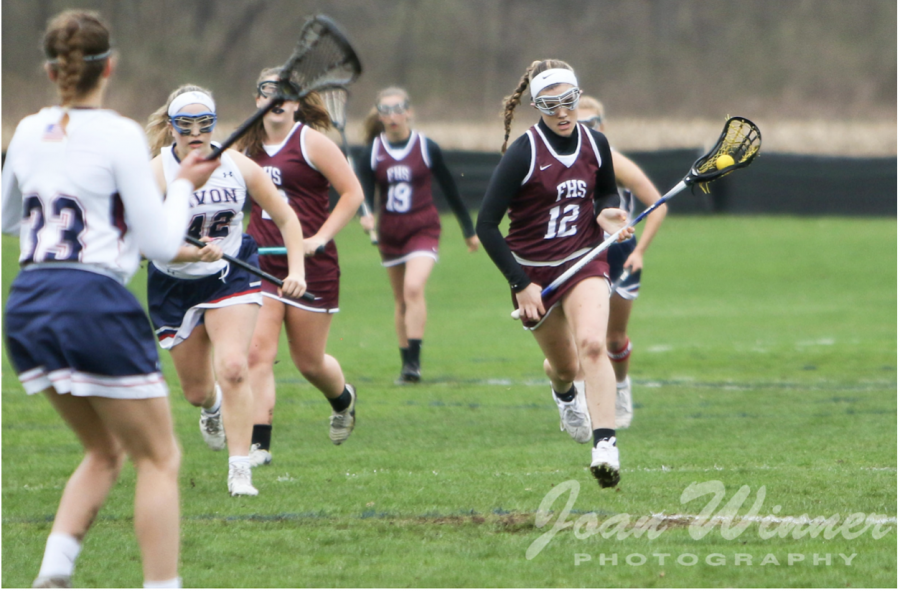 Cruise control -- Junior Liz Neri cruises past defenders and brings the ball up the field in a 2019 away game against Avon. Neri is a tri- sport athlete and is currently preparing for a breakout junior lacrosse season.

As student athletes continue to adapt to the safety precautions while playing during COVID, the spring season looks promising. Junior Liz Neri is a tri-athlete at Farmington High School playing soccer, basketball, and lacrosse.

Currently, Neri is preparing for her second lacrosse season which officially started on March 24.

“The lacrosse season for me has definitely been the most affected because of the missed season, but I’m very hopeful that we will get to play this year,” Neri said.

The Connecticut Interscholastic Athletic Conference (CIAC) has released that spring athletes will not have to wear a mask while playing in a game unless they choose to do so. Additionally, some of the safety precautions while practicing and playing games for the spring season involves wearing masks on the sidelines, and staying six feet apart.

Additionally, it is still unknown whether or not there will be fans allowed at spring games.

“Without crowds being at sports games it’s a little harder to get excited for games so coaches and team captains have really emphasized how important it was to be really engaged on the bench and constantly cheering which helped to bring back the feeling of playing in front of big crowd prior to COVID,” Neri said.

Although athletes are not having all their traditional pre game traditions such as pasta parties and other team bonding activities outside of just practices and games, players have made the extra effort to bond in the shorter time they are given during practices.

“It’s definitely harder to do team bonding things because there’s no pasta parties, but we are very hopeful we will get to do some team bonding activities outside once the weather gets warmer,” Neri said.

The CIAC has also released Spring season schedules which include a full 16 game schedule and they also announced that the traditional state tournament will start June 1 and go through June 13.

“As we prepare for the lacrosse season we are going in with a high expectation and want to create a really good environment from the start. Since this is both the freshman and sophomore classes first year playing for the high school team we want to make sure we introduce them to traditions and really welcome them to the team,” Neri said.

For underclassmen this is their first year playing at the high school level, so the team plans on introducing them to traditions the program has had for years like sister bags, pasta parties, and team bonding activities, while still following the COVID-19 precautions.

As student athletes continue to work very hard teams are working to make up for lost time and to start off the season strong. Practicing with equipment officially starts on March 27, and from there the process of creating teams will continue and athletes will start playing games officially on April 10.