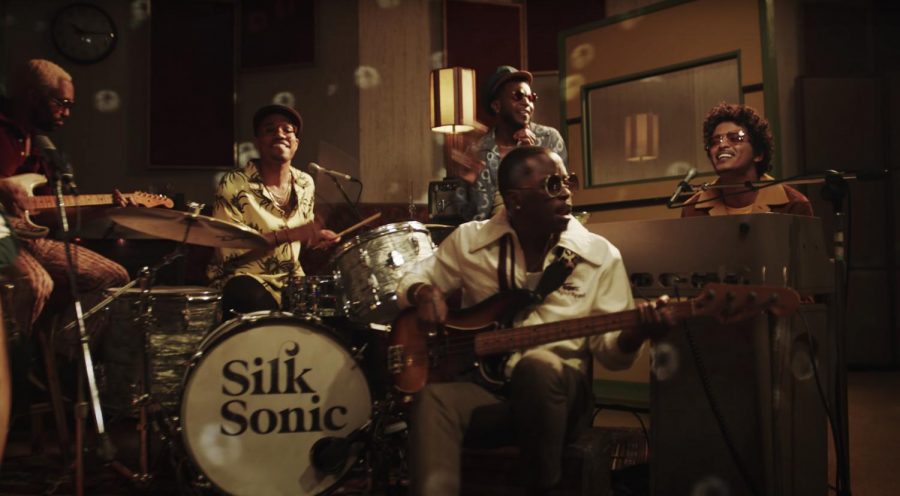 Walking through the Door: Bruno Mars (keyboard) and Anderson .Paak (drums) perform their new single “Leave the Door Open”. The two artists have joined forces to create the group “Silk Sonic”, an homage to the R&B and soul groups that acted as the primary influence for their musical passion.

Debuting the single “Leave the Door Open” on March 5, Bruno Mars and Anderson .Paak introduced themselves as the group “Silk Sonic.” An homage to the R&B and funk artists of the previous generation, the duo looks to revive the soul of Motown within a modern context. The forthcoming album, An Evening with Silk Sonic, attempts to foster the experience of a live performance that is accessible in a studio album.

Mars, a now “verteran” in the recording industry has released three studio albums over the past decade. Of which, his most recent record “24K Magic” received six wins at the 2018 Grammys. As a member of Silk Sonic, Mars will primarily contribute vocals as well as supplemental work on the keyboard. In addition to his direct musical contribution, Mars is also talented outside the recording booth, as he also acts as the producer for the album.

.Paak, an equally talented entity, contributes both drums and vocals to the album allowing the group to develop an immediately recognizable sound. With a total of five studio albums, the most recent being the Grammy winning Ventura .Paak looks at the partnership with Mars as an opportunity to explore a genera that shaped his passion for music.

The track “Leave the Door Open”is a soulful groove that highlights both Mars’s excuisit vocal range and .Paak’s rhythmic prowess on the drums. It provides the listener with an old school composition and execution that is sure to channel their inner 70’s soul.

The upcoming An Evening with Silk Sonic promises to reintroduce the modern generation to arguably the most influential genre of the last century and the duo of Mars and .Paak are more than qualified to deliver an outstanding record. “Leave the Door Open” can be found on all major streaming platforms, and is sure to deliver all the vibes.