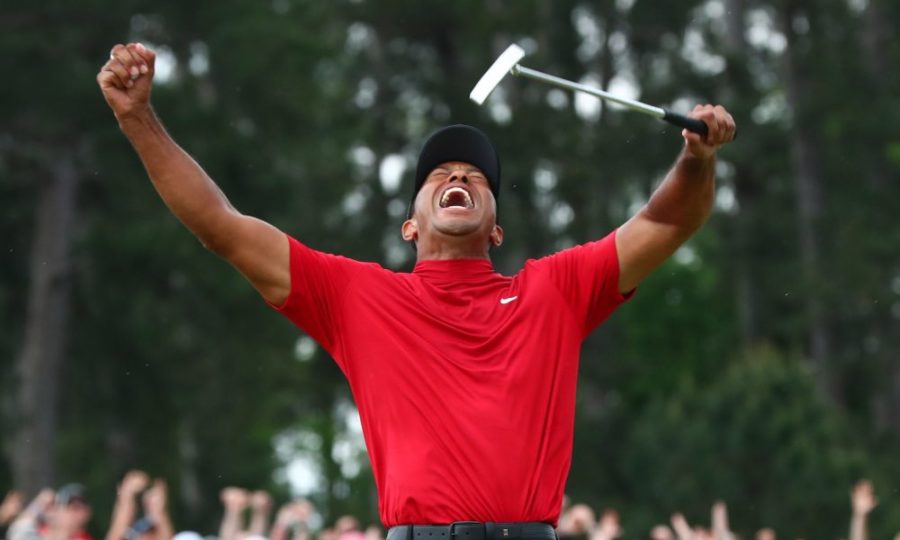 The joy of triumph-- Tiger Woods throws his hands up for joy as he realizes he just won the biggest golf tournament in the world. This was Tiger’s first Masters Tournament win since 2005.

On April 14, many tears were shed, but there was no tragedy. Tiger Woods won the Masters. The last time Tiger won the Masters, Hurricane Katrina rocked the gulf coast, Carrie Underwood won American Idol, and Wedding Crashers hit theaters.

Over the past 14 years, a lot has changed in Tiger’s life. Tiger is currently a ripe 43. He has gone to jail; he has had major hair loss; he has had five surgeries as well as a divorce. This dark version of Tiger is what everyone has grown up knowing. we find ourselves waging a battle with our phones and social media for dominance to live our lives frequented by people we have a real connection with and try not to become lonely due to time spent on our phones.

Before that, Tiger was a dominant performer, considered invincible around the world.

Many thought they would never see him in classic Tiger form, but when the green glare of the Augusta grass came on TV, and I saw that bright Tiger smirk on the first tee, I knew this tournament could be Tiger’s. He started off with a two-under par, but was not quite there. The second day was a giant step in the right direction. It seemed like the flowers were a little brighter and the fans’ roars were a little louder because Tiger was one back at one point and the golf world rumbled with excitement.

Day three can be described in three words: TIGER IS BACK. His driver was on; his irons were on; his wedges were on. His putter could have been better but that was ON too.

Finally, the highest pinnacle of golf arrived: the final day of the Masters. The weather was supposed to move in later in the day so the final grouping was Molarnari from Italy, Finua from the U.S., and the G.O.A.T himself: Tiger from the U.S.

At 9:22 a.m., there was hope for history, but no golf fan was ready for the volume of history. Molinari came out swinging, taking a two to three shot lead. Finau dropped back and Tiger made some crucial bogeys mixed in with birds to set the 18.

Now that Tiger pared in, Molinari falls back for the tie with Tiger. He is a runaway train to the finish line. He played steady, unaggressive. He was not fighting to get to a number. He was fighting to get out of the round. Tiger made some pretty good birdies and pars, especially on 16. When he striped the drive off the narrow 17 tee we all knew this tournament was over, even before they putted in on 18.

Tiger runs over to his kids, kids that have never seen their dad in a good place in his life. One final tear runs down my face as history was officially made.