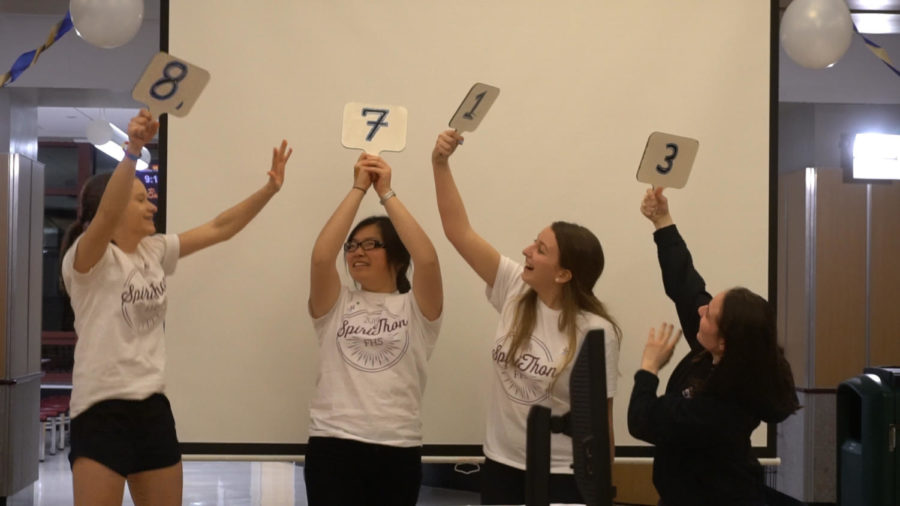 The gift of giving-- (left to right) SpiriThon Club committee chairs junior Sophie Giuffria, seniors Michelle Ni and Kathleen Griffin, and junior Gilly Gereg celebrate raising $8,713 for Connecticut Children’s Medical Center (CCMC). The club’s goal for this year was $8,000, and the event took place on February 9 in the high school’s cafeteria and gymnasiums.

The fourth annual SpiriThon took place on Saturday February 9, in the high school’s cafeteria and gymnasiums. This yearly fundraiser supports HuskyTHON, a dance marathon at the University of Connecticut (UConn) that benefits the Connecticut Children’s Medical Center (CCMC). By the end of SpiriThon, the event raised $8,713 for CCMC. Currently, the total is over $9,000.

The event lasted from around 5 p.m. to around 10 p.m. and featured video games, a tug-of-war tournament, a dodgeball tournament, a Kahoot trivia contest, and a gift card raffle. 13 local businesses either donated food served at the event or gift cards for the raffle.

A patient of CCMC, Christian Kosovic, and his parents attended the event. At the beginning of the night, they shared the story of their fight with cancer. Kosovic suffered from leukemia that went undiagnosed until his parents brought him to CCMC. Kosovic is now six months out of treatment and is on pace to be considered cured by next year.

“We literally owe our son’s life to Connecticut Children’s because he literally would not be here today without them. So, we’re incredibly grateful and this is why we tell our story,” Kosovic’s mother, Teresa Kosovic, said.

Tea Leaf Realty, a business owned by Giuffria father, Rob Giuffria, sponsored the event for a second year in a row. Their logo is emblazoned across the back of the 2019 SpiriThon T-shirt designed by senior Anushka Jami, who also designed last year’s shirt.

“Being a SpiriThon participant for the past three years has allowed me to figure out the best ways to raise the most money. I try to ask as many people as I can for donations, realizing that some will say ‘yes’ and some will say ‘no’. If people know that it’s a good cause and you’re passionate about it, they are usually happy to help,” Giuffria said.

Mulcahy started the SpiriThon Club during the 2015-2016 school year. As an undergraduate of UConn, Mulcahy participated in HuskyTHON. After becoming a teacher, he started an event at the high school as part of HuskyTHON’s JonaTHONs program which helps facilitate elementary, middle, and high school fundraisers that contribute to HuskyTHON’s total.

“The biggest takeaway from the past four years is simply that if you give kids a good cause to be passionate about, they will go above and beyond to do incredible things. I have been fortunate to work with some amazing students over the past four years, and it is their hard work that has led to the success of SpiriThon,” Mulcahy said.