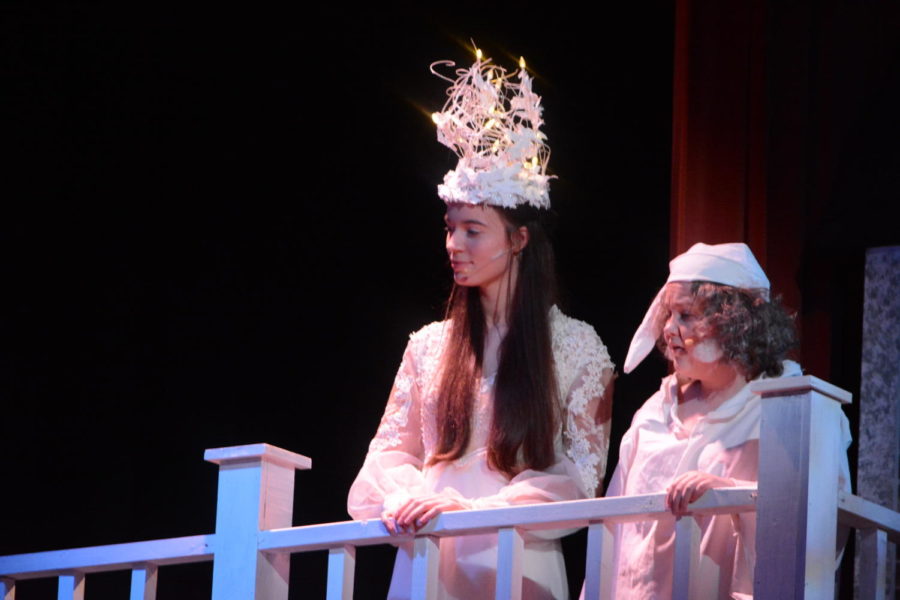 Charles Dickens’ holiday classic graced the high school auditorium from November 29 to December 1. Directed by English and drama teacher Katie Seymour, English teacher Vanessa Clarke, and senior Camille Hoheb, the Drama Department’s production used the Romulus Linney stage adaption of A Christmas Carol which remains faithful to the original novella about an old, penny-pinching curmudgeon living in Victorian London who has to learn to appreciate the true spirit of Christmas.

“We talked through a few plays that we thought would be challenging and fun to perform. A Christmas Carol came up, and we both loved the play,” Clarke and Seymour said.

Comprised of two acts with a 15-minute intermission in between, the play starts with Ebenezer Scrooge, portrayed by junior Audrey Lewis, hard at work in his office on Christmas Eve. He turns away a child caroler, rejects good samaritans soliciting donations for the poor, and rebuffs his nephew’s invitation to a Christmas party. Annoyed by all aspects of the holiday, Scrooge begrudgingly gives his clerk, Bob Cratchit,played by senior Tim Scalzo, Christmas day off, but demands that he be early to work the following day.

However, that night, when Scrooge turns in for bed, the ghost of his long-dead business partner, Jacob Marley, visits the grumpy old man. Marley declares that three ghosts would visit Scrooge to turn him from his selfish ways. The proceeding events, as Scrooge visits Christmases past, present, and future, do indeed thaw the frozen heart of the unpleasant grump and offers an optimistic vision of humanity.

Dickens published A Christmas Carol well over a hundred years ago in 1843. Since then, Scrooge’s redemption arc has been adapted to the big screen, small screen, and everything in between, becoming a staple of the holiday canon.

The cast of the high school’s production numbered 36 in total.

After the actor initially casted as Scrooge dropped the role around a month prior to the premiere, Seymour asked Lewis, who had been Mrs. Cratchit, to take on the lead. Although Lewis was involved in previous plays and musicals at the high school including last year’s The Crucible and Fiddler on the Roof, this was a role of unprecedented scale for her. According to the junior, Scrooge speaks on nearly every page of the script, but she willingly accepted nonetheless.

“. . . I was willing to take on the challenge and do my best, as I knew I would learn and grow from it in the end,” Lewis said.

Lewis stayed after school for hours memorizing all her lines and developing her delivery.

“It was a lot of work, but I survived,” Lewis said. Scalzo similarly considered his character’s personality in formulating a performance.

“He’s poor, and he works for Scrooge in order to support his family. He’s timid because he’s afraid of losing his job and letting his family down,” Scalzo said.

Due to the scarcity of lines for Cratchit, Scalzo placed extra importance on facial and bodily cues. For instance, to express Cratchit’s role as a father, Scalzo tried to silently interact with the children in scenes where Cratchit does not speak.

Sophomore Jack Tyler faced challenges with his intricate costumes. As Marley, Tyler had to manage his prop chains to ensure that they remain on him. Furthermore, the cloak of The Ghost of Christmas Yet To Come hampered Tyler’s mobility. However, according to Seymour and Clarke, the audience responded favorably to the outsized costume.

“Even though there were hard parts to the play… I am so glad that I contributed and participated in this amazing show,” Tyler said.

Art teacher Andrew Minor designed the set for the production. He considered recommendations from the stage adaption as well as designs from other high school shows to develop his version. To minimize costs, Minor reused parts of the sets of Grease, Little Shop of Horrors, The Crucible, and Fiddler on the Roof.

Construction teacher Jeff Teravainen’s students helped to build the sets, while applied arts teacher Jim Corrigan’s 3D Design class were responsible for the props that featured in the play including Marley’s chains, the cloak and the underlying framework of The Ghost of Christmas Yet To Come, as well as the headdress worn by junior Wiktoria Adamska who portrayed The Ghost of Christmas Past.

“The students really seemed to enjoy working on this, and I could see a sense of pride in their work as they completed each piece and brought it down to the stage,” Corrigan said.

As with previous productions, the Art Club painted the set.

“Every play there are certain students who are extra helpful and in this case I want to shout out Sarah Baker and Al Lukaszczyk. They put in the most amount of time in painting the set, and I appreciate their diligence,” Minor said.

Sophomore Sofia Podgorski was Costume Assistant for this year’s play. She made Scrooge’s pajamas and
worked on other costumes including The Ghost of Christmas Past’s cloak. This is Podgorski’s first production.

“I never realized how much time and effort went into working on the play,” Podgorski said.

The Audiovisual (AV) Department also played an important role in the play’s success. Director of Media Technology Evan Foreman narrated the beginning and the end of the play, setting the tone for the story. The students in AV were also responsible for assisting with the lights and sounds of the play. Freshman Ananya Patil
executed the sound effects and live mix. Sophomore Yana Tsyvis worked as the light operator, while freshman James Harman was the microphone supervisor.

According to Seymour and Clarke, the play received a positive reception. Lewis also received complementary feedback.

“We had an impressive turnout this year and for good reason. I feel as if everybody’s hard work paid off in the end, as we were able to put on a fantastic production,” Lewis said.