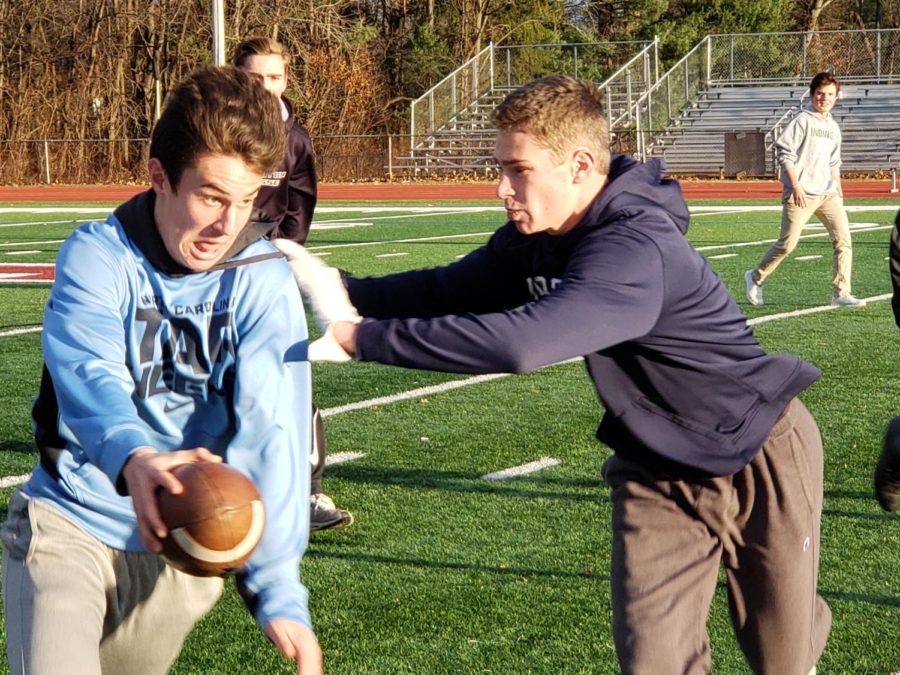 Touchdown--Junior Grayson Herr dives for a first down in the Turkey Tourney on Wednesday, November 28. Herr’s team later lost the championship game 35-28.

The Class of 2020 hosted a flag football tournament, called the Turkey Tourney, on Wednesday, November 28. This tournament raised a total of $176 for the class.

“We thought it would be a fun way to raise money for the class,” Class of 2020 adviser Kalyn Johnson said.

The cost to register was $30 per team with a special discount of $1 off per can of food donated. By the end of the tournament, 10 food cans were collected for the Farmington Food Pantry. There were nine total teams that played in the event; the winning team consisted of juniors Mitch Guglielmo, Jake Conrad, Mike Gregory, Nick Greco and Jordan Martin, and sophomores Nick Santana and Kajhon Carabello.

The games were each 10-minutes long with a running clock, allowing the tournament to run more efficiently and quickly than a tournament without one. Each team played two games and from there were seeded based on their record in a single-elimination bracket. Guglielmo was a key contributor to his team’s success.

“Our toughest match was the championship game because of the constant scoring by each team. It was back and forth but we were lucky to come out on top,” Guglielmo said.

The event was well-received by participants and allowed students who aren’t on the football team a chance to play. The Class of 2020 is planning more events this year