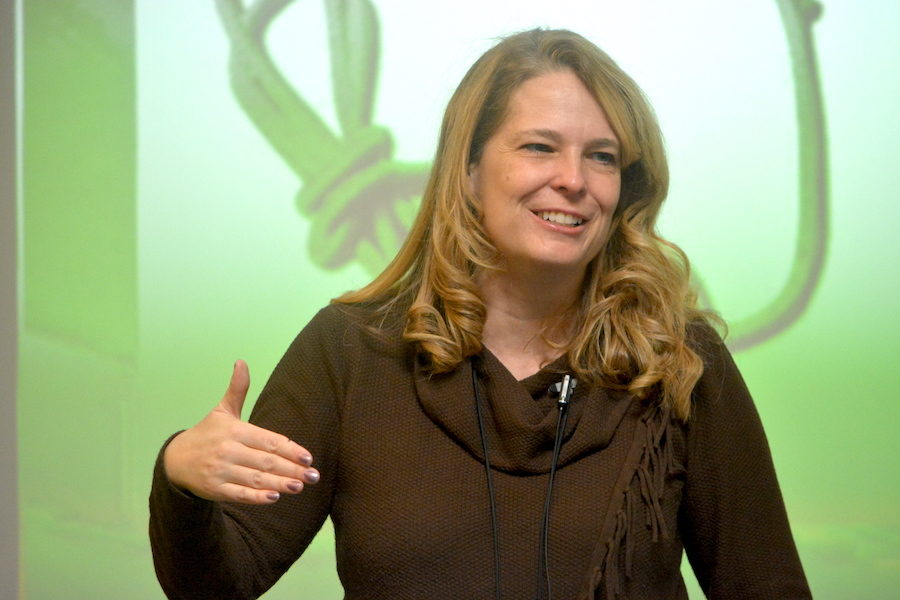 Book Talk-- Author Jennifer Nielsen talks about what inspires her as a novelist at her recent visit to the high school on March 16 in the library during periods four and five. Nielsen's novel Traitor's Game released on February 27, and Resistance will be released this summer.

Author Jennifer Nielsen visited the high school on March 16 during periods four and five to discuss her latest novels: The Traitor’s Game, released on February 27, and Resistance which is due to release this summer. Nielsen also discussed her writing career, encouraging others to join in on the process.

“Everything in the world is a story, and everything begs to have the story told. So, I find it impossible to exist in the world and not want to write. I’ve always had stories inside my head, and it just came to a point when I realized I was happier writing the stories down than holding them in my head,” Nielsen said.

Nielsen attests that any writer should be a reader, comparing a non-reading writer to “a football player who never watched the Super Bowl.” Ultimately, it was literature that promoted her to begin writing. While Nielsen reads contemporary literature, citing Harry Potter and the Goblet of Fire as a favorite, it was S.E. Hinton’s The Outsiders that sparked her interest. Assuming that all authors were “old dead guys,” she was surprised to find that Hinton was a woman.

“When she read S.E. Hinton’s The Outsiders, she was inspired to research the author and found out that Hinton was a teenage girl–just like her. This realization–that the top-selling YA text of all time was written by a teenage girl–was an epiphany for her. She cites it as the moment when she realized she could and should pursue her dream,” Miller said.

Sharing her writing process, Nielsen discussed how she develops her characters and how she makes decisions in her novels. For example, for each major decision, she considers at least five possibilities. Describing writing as a continuous process, she encouraged inspiring writers to engage with the world around them.

“[Nielsen] said that the writing process is all over the place; the path is never straight. You go back then forward and back again…She helped us build a world starting from an image of one character, which was really cool,” junior Bella Mendes said.

Nielsen is the fourth author to visit the school this year, following authors Matthew Dicks, E. Lockhart, Amanda Maciel who visited during the first annual Lit Fest. Last year, authors Nicola Yoon and Paul Volponi had visited to share their new novels. These authors are invited by the FHS BookLovers Committee who are working to “create a community of readers at the high school,” according to library media specialist Nancy Carlson.

Sophomore Olivia Hoffman, who is a Nielsen reader, believes that regardless of an intrinsic interest in reading or writing, author visits are useful for all students.

“I believe all students, especially avid readers or writers, should participate in author visits. Regardless of whether you have read any of their books, there are still valuable takeaways that can be applied to improve your writing, whether recreational or for English class,” Hoffman said.