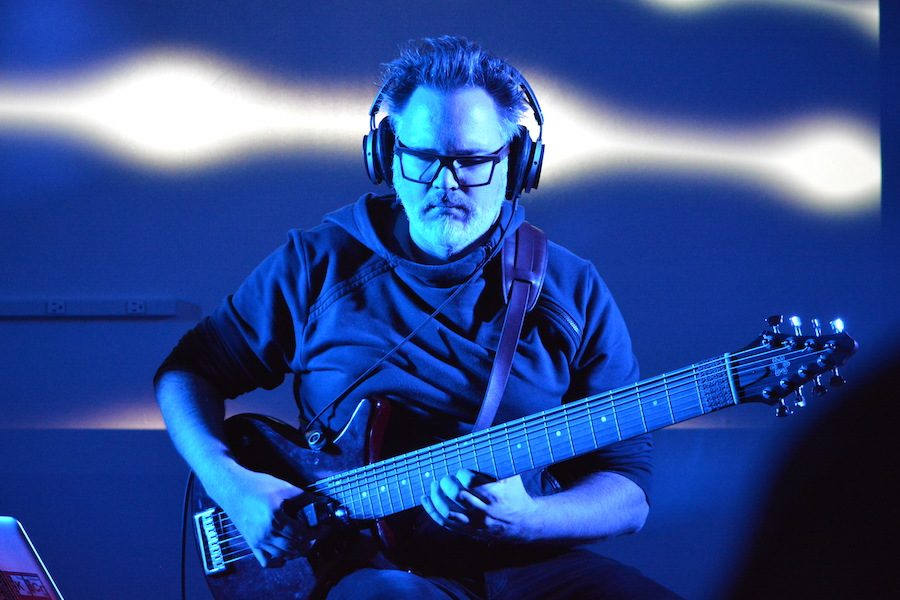 Ready to rock-- centrozoon member Markus Reuter plays a ten-string touch guitar of his own design at the centrozoon concert that took place in room 807 on November 17. centrozoon is comprised of Reuter, Bernhard Wöstheinrich and Tobias Reber, improvisational musicians who visited the high school as part of their 20th Anniversary Tour.

World-renowned, German music-group centrozoon performed in room 807 on November 17. The Edge Media Space, an extension of the Audio-Visual Department (AV) that was created in room 807 this summer, hosted a score of people including fans who flew in to see the concert.

“I feel very strongly that it is important to have musical and art experiences that nudge people out of their comfort zone, just to show other people what may be possible. Both as a listener, but also for budding artists that hopefully that music like this will inspire people to experiment and try,” AV Director Evan Foreman said.

Centrozoon members Markus Reuter and Bernhard Wöstheinrich played improvisational music using a ten-string touch guitar, of his own design, and software synthesizers while Dutch Rall, an American-based visual artist, musician and friend of the two, projected graphics in the background. The concert was a part of the band’s 20 Year Anniversary Tour across the Northeast of the United States. The third member of the band, Tobias Reber, was unable to perform due to previous obligations.

Reuter defines their genre as simply “music,” one that he says is “eclectic” and borrows from others. The audience got the opportunity to hear the group play four different rounds of improvised music and ask Reuter and Wöstheinrich questions in between sets. According to Reuter, the small audiences creates a connection between the two musicians and the people in the room that guides the music as they play.

“It’s about knowing how to challenge myself. [The music] is more about myself than it is other people,” Reuter said.

According to the duo, the most important thing in creating their music is listening to one another and allowing the setting to shape the sound.

“I was very impressed by the complexity and the structure that they gave in their compositions. They used abstract forms as the component building blocks of their music,” Foreman said.

The two musicians recognize that the style of music that centrozoon plays differs from what people are exposed to but they encourage others to listen.

“We try to be brave with our music. We try to push borders,” Wöstheinrich said.

But despite the complexity and uniqueness of the sound, the crowd drew not only adults, comprised of faculty, friends and fans from around the United States but also students.

“It was really interesting just to be open to a new, different perspective of music. The whole atmosphere of it was cool: the lights, the visuals. It all tied into each other,” sophomore Olivia Urban said.

This is the first major event to take place in the Edge Media Space but the musicians felt as though it was a success as they connected with people and further were able to spread the love of music.

“It’s really important to have spaces like this, this evening, that allow for live performance of unique and not-necessarily what is in the main, popular culture and music. People need to get out and experience something that they may not even like, just to expand their minds or their experiences in life. Places like this are really important to have so that there is a platform for that to happen,” Rall said.