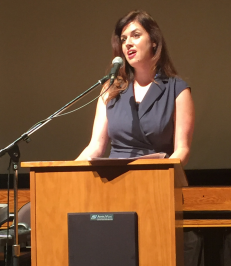 Inspiring with words-- 1998 Alumna Siobhan Oat-Judge speaks to seniors at the annual Senior Convocation. Currently, Oat-Judge is a Middle East advisor at the US Department of State.

On September 23, the Class of 2017 celebrated and officially marked the beginning of their last year with the annual Senior Convocation.

The day started off with a continental breakfast provided by Chartwells. Afterwards, seniors gathered in the auditorium for an introduction by Principal Bill Silva and speeches given by 2017 Class President Allen Haugh and class of 1998 alumna Siobhan Oat-Judge.

“Convocation is an opportunity to launch into senior year for the graduating class, to come together and set the tone in a positive way. It is somewhat of a privilege for the seniors that day because it’s all about them. We always try to make it a priority to be fun, but also ensure the students get something out of it,” Silva said.

Haugh said he wanted to deliver a message of togetherness and moving forward throughout the year in his speech. He made it a point to acknowledge struggles, perceptions and biases of and against the high school and the class.

“We have 160 days at the top of the totem pole, where we have reached the pinnacle of the Farmington Public Schools – where we, in so many ways, are the face of Farmington. Those in the grades below us are watching us. Our peers in other communities are watching us. What we do now matters… Our individual words and individual actions find a way to speak for all of us,” Haugh said.

Following Haugh was guest speaker, Oat-Judge, who talked to the seniors about what she has accomplished since leaving high school. Through her international experiences and career choices, she attempted to inspire seniors about life beyond Farmington.

“Little did I expect when I was sitting where you are, savoring my last year of high school and eagerly planning what I would do next, that I would someday live in Kabul, Afghanistan, Islamabad, Pakistan, and in Colombo, Sri Lanka,” Oat-Judge said during her speech.

After both speakers concluded, the seniors took a class picture and then finished off with a game of College Jeopardy. The Jeopardy game focused on college applications, financial aid and random facts.

Throughout the process, the event presented students with the opportunity to spend time together as a class and celebrate the end of their high school career.

“Convocation was an opportunity for my friends and I to take a break from the stressors of senior year, and be able to celebrate together,” senior Hannah Nagel said.