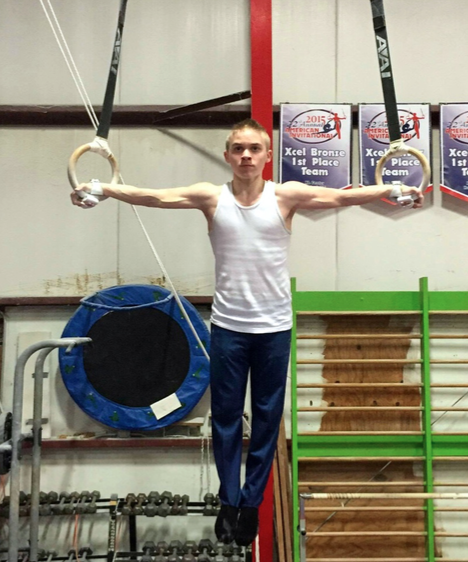 Going for gold -- Swanson practices on the rings at The American Gymnastics Training Center in Southington, Conn on April 1. He looks to focus on this event next year.

Despite only being his fifth year competing in gymnastics, junior John Swanson has found a love for the sport. Through his training at The American Gymnastics Training Center in Southington, Conn., Swanson has become a level eight gymnast out of a possible 10 levels.

This year, Swanson competed in a multitude of events including handle bars, floor exercise, vault, parallel bars, high bars and rings. However, he is planning on focusing all of his training to rings during his senior year and to specialize in that competition. He currently trains five days a week for three to four hours a day.

Although the school doesn’t have a male gymnastics team, Swanson found inspiration to pursue the sport through an outside resource.

“I started it because I thought it was different; I thought it was fun and exciting. I think I started it in 2012 when I watched the Olympic mens’ gymnastics on TV, and I was like this is awesome. I wanted to do something similar to that, and so I joined it. I really like the team aspect. Some people might think of it as being an individual sport but there’s nothing worse than going to a meet by yourself and not having your teammates there to cheer you on or back you up,” Swanson said.

Swanson credits his teammates for helping him improve and for making the experience more enjoyable.

“My teammates are always there for confidence and fun. You can’t do well if you’re not having fun, and they’re always there to talk to. Also, if they’re better than you, then you have something to look up to,” Swanson said.

Eric Ouellette is a gymnastics coach at The American Gymnastics Training center and has coached Swanson for the past two years. Ouellette described Swanson as being motivated, diligent, and wise beyond his years. Although Swanson has already placed first in state at level seven, his coach believes that he still has even more room for growth.

“John has a lot of potential as a gymnast. The amount he’s learned in such a short period of time is impressive. He’s also very athletic so he tends to pick up skills and technique pretty quick. The best example of how he’s improved is on rings. The caliber of skills he’s currently working on are on par with elite gymnasts. Our goal as gymnast and coach is to get him competitive enough on rings to be able to compete on college team which is difficult considering there are less than a dozen [college] teams in the country,” Ouellette said.

Even if he isn’t able to join a Division I college gymnastics team, Swanson hopes to continue practicing and competing in the sport as a collegiate and beyond.

“The only [college] I’m looking at is the University of Michigan but other than that there are club teams that I’m definitely going to go for. It’ll be something, and maybe I’ll be able to do something later on like a personal trainer or at least as something to keep me in shape for the rest of my life,” Swanson said.