Junior archer represents US in Turkey 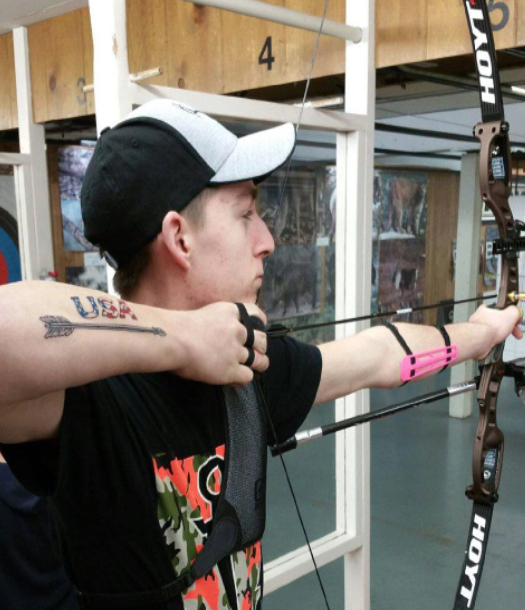 Hitting the mark--Junior archer Tyler Ruzbasan practices shooting at Hall’s Arrow Indoor Archery Range prior to going to Turket and offficially competing. Ruzbasan and his team placed fifth overall in the competition.

Junior Tyler Ruzbasan represented the United States in the 2016 World Archery Indoor Championships in Ankara, Turkey where his team placed fifth overall. He is part of an archery team that trains at Hall’s Arrow Indoor Archery Range in Manchester, Connecticut. They compete in competitions all over the nation, and they annually appear at the National Indoor Archery Competition.

Ruzbasan’s interest for archery began when he was 15 years old. He was influenced by his father who let Ruzbasan borrow his own personal bow, then he never gave it back to his father starting his passion.

“When my father was my age he started doing archery competitions, and when he was in his twenties he participated in the Olympic trials. He gave me his bow hoping I would gain a passion for archery,” Ruzbasan said.

The high school’s nurse Kristin Baker grew up with Tyler’s dad, as they both went to West District Elementary School together. She recalls his interest for archery when he was a child.

“I remember that when we were in elementary school he was really into archery, and he had an archery target set up in his yard and he would always be practicing his archery in his yard,” Baker said.

Archery was an activity for Ruzbasan until he realized his potential for the sport. He then started to shoot for competitions, and has taken the sport seriously ever since.

On top of traveling, Ruzbasan also loves the feeling that archery gives him.

One friend Ruzbasan has made through archery is Lindsey Rek, who practices with Ruzbasan and has developed a friendship with him through the sport.

“Archery has played a big part of mine and Tyler’s life for as long as I can remember. Archery has not only made Tyler an incredible athlete, it has made him a pristine leader and team player. As an archer I can say Tyler is an amazing competitor, motivator, and friend,” Rek said.

Ruzbasan hopes to continue his passion for archery long after high school, potentially making a career out of the sport.

“I use archery when I go hunting with my father and I want to become a coach and start my own club, and I will try out for the 2020 Olympics. I hope to just keep progressing throughout the sport,” Ruzbasan said.